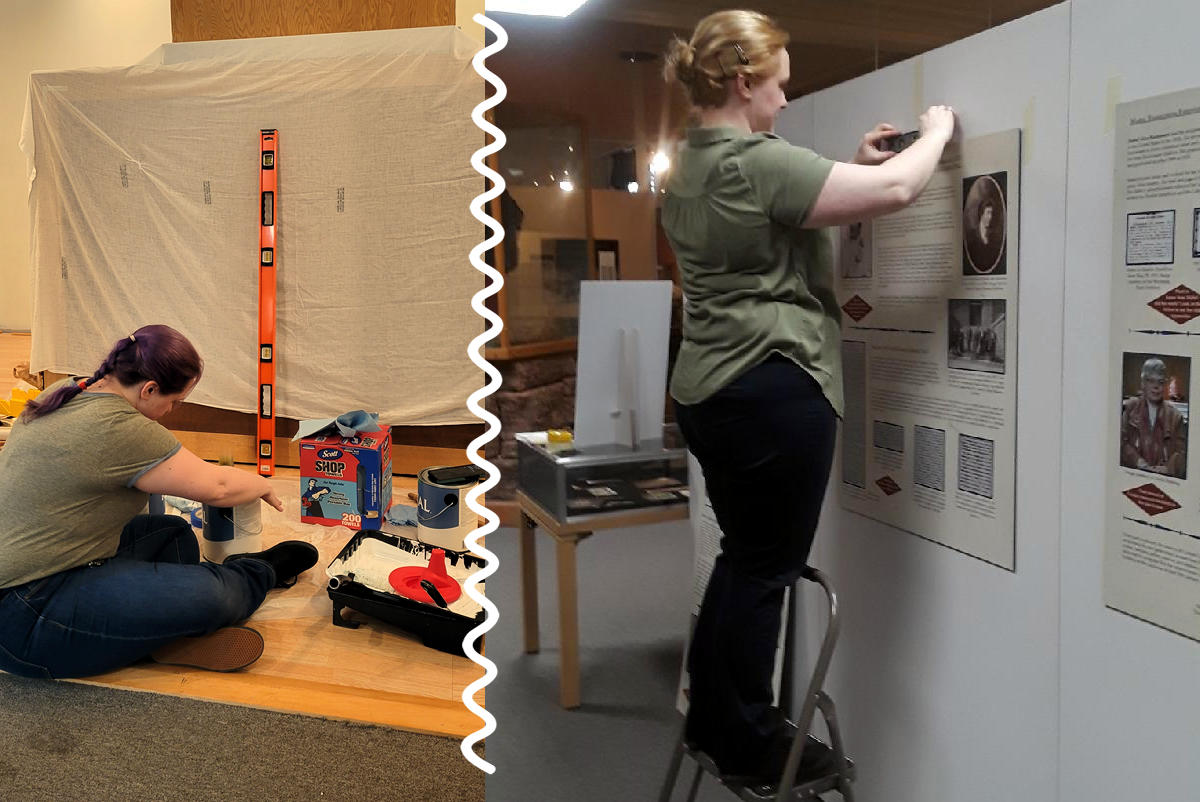 Did you know that when you walk into a museum and wander through the exhibits, you’re usually seeing less than 10% of what that museum has in its collections?

In bigger museums, that number’s much, much smaller—probably less than 1%. Well, in the same way, you’re also only seeing a tiny fraction of what actually goes on in a museum. Those doors marked “Employees Only” have a lot going on behind them!

See, my official title here at the CCM is “Registrar”. For most people, that conjures up mental images of the little old lady in the basement of city hall who you have to deal with anytime you need copies of old records. And yes, part of my job involves paperwork. But in a small museum, there are usually many more roles to be filled than there are people to fill them. So we have to transition between multiple job “hats”. In fact, I’m nearly always wearing two hats at once: Registrar (managing paperwork related to objects) and Collections Manager (managing the objects themselves). On a normal day, just those two hats take up plenty of my time. For example: if you want to donate some of your family photo albums or a cool piece of furniture from Grandma’s house, all you have to do is sign a form and hand over your stuff. At that point, your work is done—but mine’s just starting. I have to process both the paperwork and the objects. For a handful of photos, that might only take me a couple of hours. A box of old tools or a pile of ledgers, however, can take me a week to properly catalog.

And keep in mind that even the parts of the museum you can see don’t remain static either!

At the beginning of 2021, the CCM completely redid our exhibit about the transcontinental railroad. That required doing hours of dedicated historical research; writing and editing about 20 pages of text; selecting dozens of photos and objects for display; arranging about 400 square feet of exhibit space; and designing over a dozen printed panels. Not to mention actually installing the exhibit—which involved rearranging cases, fabricating custom mounts, and a lot of time measuring things and climbing up and down a ladder. In the case of our railroad exhibit, it took hundreds of hours over the course of over ten months to get to what you see on display. But that entire process repeats itself every time we update an exhibit. Guess who does a hefty chunk of all that? So in addition to Registrar and Collections Manager, I can add Curator (handling the intellectual aspects of creating an exhibit) and Exhibit Designer (handling the physical aspects of creating an exhibit) to my pile of hats. But don’t forget, if you have a question about Carbon County history, you can ask the museum. As the main person with access to our library, archive, and objects, I handle most requests for historical information. This requires yet another hat: Researcher. How many am I up to now?

All those jobs are already more than I can handle some days. Unfortunately, they aren’t the only ones I have to juggle. The thing is, the CCM is going on 80 years old. Ideas about how to take care of museum collections have changed a lot in that time. That means I constantly come across things that need updating or correcting, because the way something was done in the 1980s is no longer considered the proper way to do it. So often I’m wearing hat number 6: Auditor (inspecting things and correcting where needed). Some days that just means I have to fix a location note saying where to find an object, because it got moved and no one wrote down the new location. Other days that means I’m rewriting the description of an object because its record doesn’t give enough detail, which usually requires finding and examining the object itself so that I can make sure the description is accurate. But some days, that means I’m trying to figure out how three boxes of documents and two dozen old ledgers ended up shoehorned into a single object record—which leads to having to physically locate all those boxes and ledgers, sort out which things go with what, and create new object records from scratch. (True story. That was 2 entire days of work.)

Now more than ever, museums are fighting to find enough funding to keep their doors open. If they have to let go of staff in order to balance the budget, that means the people that are left have to add to their pile of hats. So please remember that when you walk into the CCM—or any museum—the person greeting you at the front desk is only the tip of the iceberg.

Plan a Visit to the Carbon County Museum.
Come Discover Our Story!

History is Happening Now, and YOU are a Part of it